Neil Armstrong died recently. The first human to walk on the moon slipped quietly into that Great Beyond.  Godspeed, Neil Armstrong.

For me the name of Neil Armstrong will be synonymous with two events.  The first, of course, is his landing on the moon.  I was “there” along with several million others as we  became transfixed before the television sets on July 20,  1969. How incredible it was. Television itself was barely out of puberty.  Most of us still had black and white sets.  In various extensions of family, friends, and human kind we huddled together, collectively holding our breath as Armstrong and his co-pilot, Buzz Aldrin,  skillfully piloted the Lunar lander to THE spot on the Moon…Tranquility Base.  I’ve always loved that…Tranquility Base.

I was with about a dozen friends, splayed out on the floor of our rented house in Lutz, Florida.  I was about to enter my last year of college.  The times, they were a’changing — an early Dylan song made all the more potent by the events of, well, the times. We were all pleasantly stoned on marijuana and marveling at the sights on the “boob” tube.  Just eighteen months before several of us had traveled to the East Coast of Florida to watch a Saturn 5 rocket launch Apollo 8 to a historic rendezvous with the Moon.  Apollo 8 would not land on the Moon but it would broadcast some incredible pictures that helped, for the first time, to put our place in space in a true perspective.  A blue, tantalizing dot in the midst of blackness.  It was all we had imagined and more.

Now, just a short seven months later, we had returned to the Moon, coming “in peace for all mankind.” It was as good as it gets in life.

But I said that Armstrong’s death brings back the memories of TWO  events in my life.  The second occurred  32 years later, in August of 2001.  I was recently widowed, struggling with  all the emotion and baggage that kind of event can bring.  A dear cousin, in a most generous moment, gave me the funds for a trip to Australia where our dearest friends lived.  Daryl, a native Australian, had spent 25 years with the World Bank.  Her husband, Craig, had worked in various performing arts’  associations in Washington, D.C.

We decided to make an adventure of it and Daryl compiled a wonderful itinerary that took us to The Center, that vast portion of Australia which remains largely uninhabited.  One spot she selected was The Bungle Bungles, or Purnululu, in a rugged part of the Kimberly.  We stayed at a remote lodge and with a small group of travelers we explored the region, gazing at oddly domed rocks, climbing other rocks, and exploring caves, like this one.

The caves were delightfully cool and offered respite from the hot sun. As we rested one of our guides began to sing a song called “Armstrong”.  The acoustics in the cave made his voice almost heavenly and the words to the song were very moving to me.  You can hear it here.

When he was finished I commented to another guide that I felt the song really captured the spirit of that incredible day when Neil Armstrong walked upon the moon.  “You saw it!” she exclaimed.  Her sense of awe was, I’ll admit, a bit unsettling.  After all, millions had seen the event on TV.  “What was it like?” she asked.  Her interest was sincere and so I told her what I could recall, which was a lot because it was an extraordinary time.  Even the venerable news anchor Walter Cronkite was bowled over by the landing and the walk.

Sitting in the far reaches of Australia that day, reliving the day Neil Armstrong walked upon the moon.  It was as good as it gets in life.  Thanks Neil. ❧ 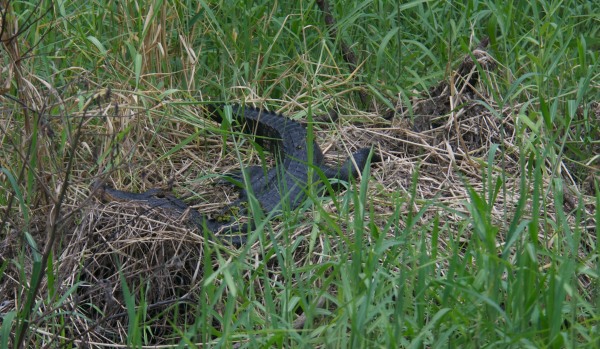 It’s no surprise that I spent part of my Sunday (August 26) at Myakka River State Park. We were under a Tropical Storm watch at the time and the River was already at near flood stage.  If we had gotten the worst of T.S. Isaac I wanted to have a good record.  Isaac decided, like so many storms before him, that getting to the Central West Coast of Florida is a lot of work.  It is a whole bunch easier to cruise through the Florida Straits, ruffle the feathers of the Margarita crowd in Key West, and then use the wide open Gulf of Mexico to feed its fury before making in landfall in Mississippi or Louisiana.

Sunday was a gloomy day and the traffic at Myakka was slim.  The water is high and lots of the wildlife is either displaced or much closer to the pathways than normal.  This momma alligator is a good example. 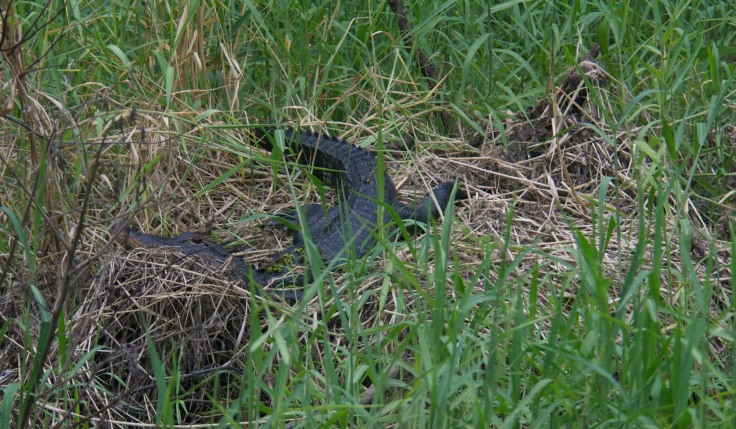 She was a few yards off the Power Line Road, protecting her brood with a watchful eye.  There were enough obstacles between her and I that I never felt threatened but I also didn’t feel like pushing any limits to get a clearer shot.

Most of the other trails were washed out for the day. I tried to navigate the Fox High Road but it was hopeless.  Way too much water, not to mention the mosquitos.

So, I began to make my way home and had just crossed over the Park Drive Bridge when I looked to my left and there was this deer.

He was no more than three feet from the car and I was traveling at about 15mph so it seemed as though he was keeping pace with me.  We made clear eye contact and I stopped the car.  He stopped too.  And for a moment we regarded each other.  I finally reached for the camera and was sure this would be alarming.  But he took it all in stride.  Perhaps our moment of eye connection made him realize there was nothing to fear.

He nonchalantly turned to his left and sauntered into the woods.

The next day was a working one, shortened by Isaac’s erratic behavior.  Our offices opened at noon and that afternoon I had a grief support group for mothers whose adult children have died.   It was a smaller group than normal, no doubt owing to the storm as well as summer vacations.  There was a lull in the conversation and then one of the mothers said, “Well, I have something that I need to share.”

Her son had died of a heart attack three years ago.  About a year after the event she was driving home and entered her gated community. She found the road blocked by a deer.  She didn’t know what to do and was startled when the deer walked towards the car and stood by the driver’s window.  She lowered the window and began to talk to the deer.  At one point she touched the deer’s nose.  She was convinced that her son’s spirit had somehow entered the deer.  A similar incident happened to her a few weeks later.

Naturally, as I was culling through these photos tonight, I thought of this lady. I don’t know whose spirit was in the deer that I saw on Sunday.  More’s the pity for that. But I have no doubt that this lady’s story is true. I have heard too many similar tales — stories of butterflies and orbs and lady bugs and objects that move on their own or beloved items that appear without rhyme or reason.

Shakespeare wrote, “There is more in heaven and earth than we can know.”  And while it is true that we may not be able to know it does not mean we can’t be aware.  ❧ 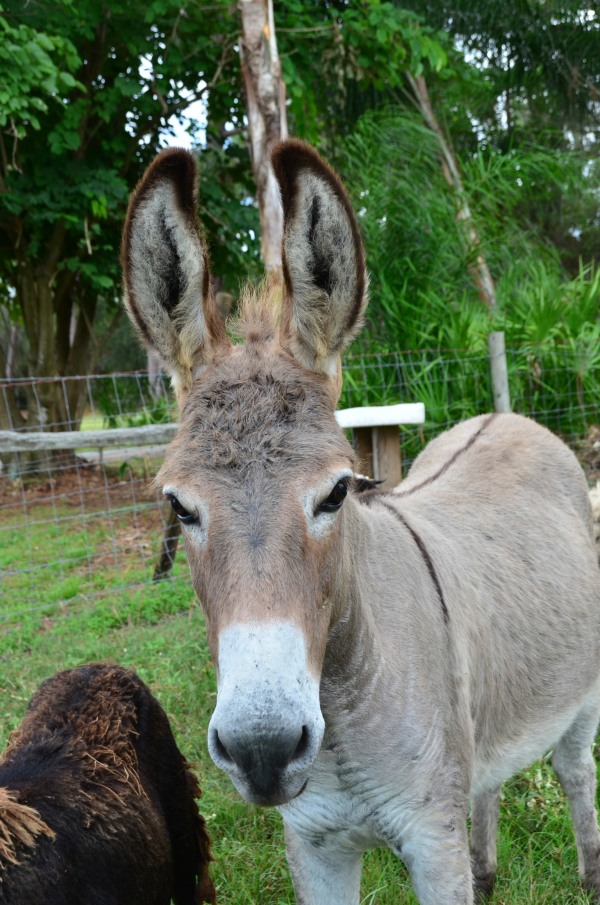 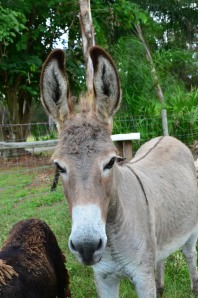 That’s Bubba the Burro …  although he should really be called Bubba the Bouncer.  We normally think of burros as docile, hard-working beasts of burden.  Or as stubborn, ornery creatures who are just a trifle on the dim side. But Bubba doesn’t fit any of those descriptions.  He heads up security at the King Farm in Bradenton, Florida.

King Farm is a beautiful tract of 103 acres, situated east of Interstate 75 at the State Road 70 exit.  As you whiz by the normal assortment of fast food restaurants, gas stations, and box stores you wonder how a working farm could be anywhere near the urban sprawl of Southwest Florida.

But King Farm is easy enough to find, a simple right turn off SR 70 onto Caruso Rd. and soon enough you’ll see the sign.  I traveled there a week ago to photograph cows.  Recently I decided I need more cow pictures and the gods obliged that thought when I met Ben and Shelby King at a mutual friend’s party. After learning what they do I quickly invited myself to their property for a photo session.  They graciously agreed.

Gracious is a word that fits nicely with King Farm.  For several months out of the year they have a farmer’s market where they sell organically grown produce.  They serve the community in numerous ways, including farm tours for school kids and opening their property to art students so they can sketch and paint some of the beautiful landscapes as well as iconic images of barns and tractors.

The Kings don’t actually raise cattle (they rent out the grazing land) but they do raise goats and sheep.  They never expected to own a burro but after coyotes began attacking their goat and sheep herds they needed to take some action.  Someone suggested a burro and since acquiring Bubba they haven’t lost a single critter.  Bubba the Bouncer is a pro.

Looking at the size of Bubba’s ears I can believe there is nothing on earth that could sneak up on him.  That included Shelby and I.  Bubba came trotting across the field as soon as he spotted Shelby.  Bubba has a crush on Shelby, that was clear.  He kept nudging (and sometimes nipping) everyone else (including me) as he positioned himself between Shelby and the rest of us.  Just doing his job! ❧