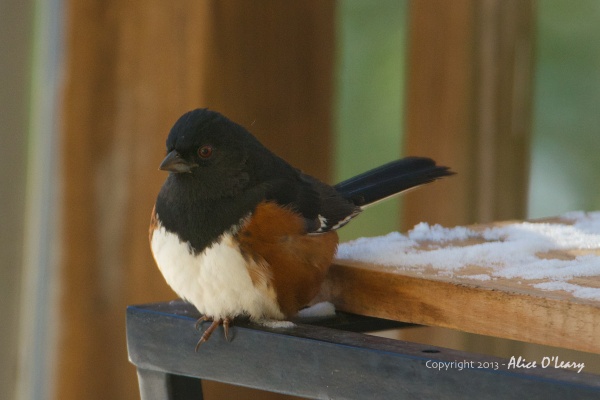 A good snow fall, like the one we had last week, brings many birds “out of hiding.”  The Eastern Towhee is one of those birds. Throughout the months that I have been here I would catch a glimpse of the Towhee, normally its backside, frittering about in the underbrush but rarely did I have a chance to study this beautiful bird. The snow changed all that. This fellow was grateful for the scattered seed on the porch as well as respite from the wet underbrush. I have now learned that Towhees are part of the sparrow family and it is wide-spread throughout North America. And apparently I am not alone in my inability to study this bird. According to Wikipedia, “The taxonomy of the towhees has been under debate in recent decades, and formerly this bird and the Spotted Towhee were considered a single species, the Rufous-sided Towhee.”  ❧