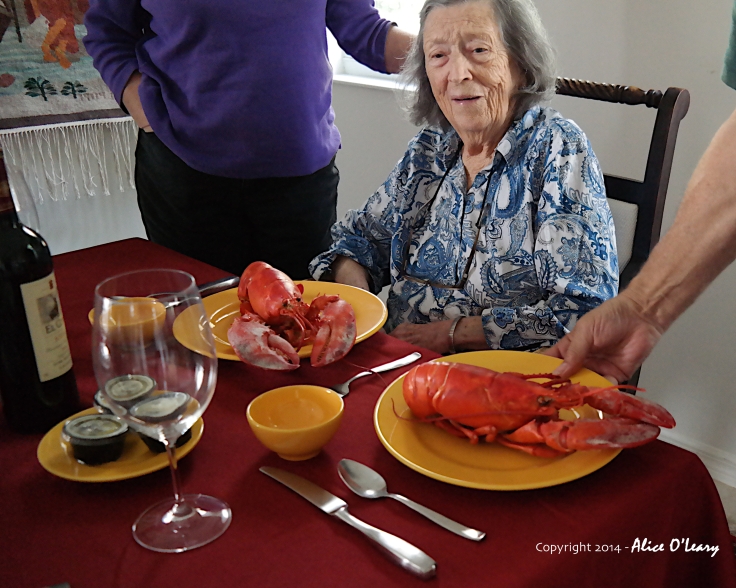 I’ve written many times about my cousin Bunny. Yesterday was her 94th birthday and her son John put together a small party. He served one of Bunny’s favorites–Maine lobster!  I can tell you that despite her age she still knows how to appreciate a Maine lobster. It brought back some wonderful memories of a long ago summer when my mother and I traveled to Vermont, where Bunny was living at the time, and we went out to a small restaurant with brown kraft paper for a table cloth and the best lobster I have ever eaten.  But what was more delicious was watching these two women, my mother and cousin Bunny, expertly dissect those lobsters to get every possible morsel. It was masterful.

Bunny has a kind of dementia that makes it hard for her to retain short-term memory but she still enjoys a good party. Her dementia made for a couple of interesting moments during the party. John presented the lobsters and Bunny asked what was the occasion?  When told it was her birthday she was completely surprised.

This was the first time I ever attended a party for a 94 year-old and how lovely that it was such a special lady. She’s got 94 years of memories in that head and she shared some of them last night. The present may not be that important anyway. There is a Simon & Garfunkel song called “Old Friends” with a lovely line:  Preserve your memories/they’re all that’s left you.  That’s something to think about.  Let’s hope we can all smile this warmly when we are 94. ❧ 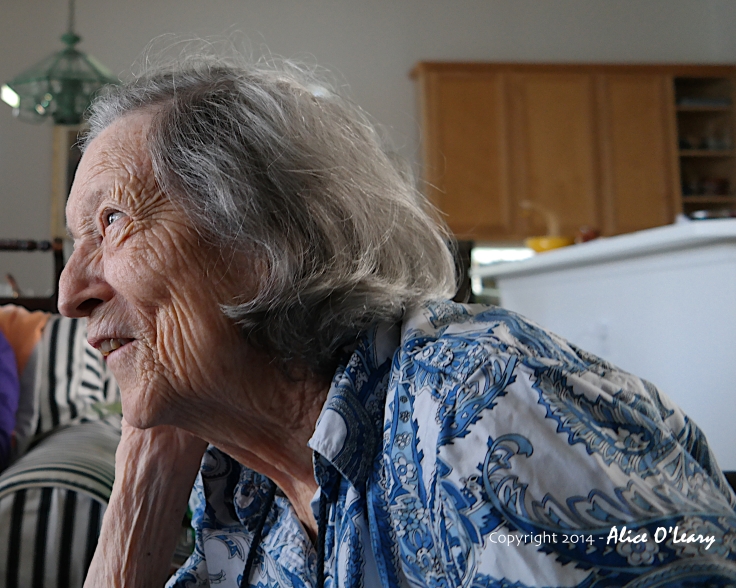 A Cattle Egret. One of my favorite birds. This one has his mating feathers and is very handsome indeed. The younger ones look very punish when their  beautiful crown feathers start to fill in. They are aptly named and can often be found in pastures among the cattle.  ❧ Tango and I came across this incredible, ancient oak tree while exploring at Myakka River State Park last week. The base of the trunk was enormous and I would estimate that it would take three people holding hands to encircle it.  Its gnarly, pock-marked bark put me in mind of my cousin Bunny and a song that John Prine wrote and was covered by numerous people, including Kris Kristoferson and Bette Midler. Called “Hello in There” the lyrics go:

But old people just get lonesome/Waiting for someone to say

That describes my cousin Bunny perfectly.  She will be 94 years-old tomorrow (March 26) and she has a form of dementia that is so hard, for her and us. She cannot retain any recent memory. She awakens and her mind is blank.  She wonders where she is but when you tell her she cannot retain it. Things loop around continuously.  I am very patient with her and have discovered that if you are patient enough (and she must be patient too) you can get some things to “stick.”  Once that process happens you can dig deeper and things begin to emerge. She seems to have memories of 2005-2007 but not much beyond that. The fall that injured her pelvis and led her to the ALF occurred in 2010.  So for 4 to 7 years she has been floating in the dream-like world wherein she frequently is driving and she awakens thinking she has just driven in from New England or “the boonies.”  I asked her what the “boonies” are and she said “the Florida forest.”  I wonder what images she is tapping into because she has been coming to Florida since the 1940s.

It is wondrous on many levels but on a basic human level it is very sad.  Two days ago she got into a loop of asking if she had asked these questions before.

“Well,” she drolly replies,  “that must be tiresome.”

I could only laugh … and hope the tears in my eyes don’t fall down my cheeks. ❧

There was an unexpected visitor this morning.  A bluebird got stuck in the pool cage!  I can’t recall ever seeing bluebirds in Sarasota. The first one I saw was a couple of years ago in Laurel. But since staying at Mary’s I’ve seen several, at least three at a time.  Hard to say if it’s a family settling in or just “snowbirds.”

We aren’t sure how this fellow got into the pool cage His mate was outside calling to him and he would answer–frantic, reassuring?  Oh, to understand what birds say.

And here is a good shot of his chest.

He safely escaped after we opened the door. I saw two bluebirds about an hour later as I walked Tango. I could swear one said, “Thank you.”  🙂

Frequent visitors by now will have figured out that I take many pictures and only a small percentage reach this blog. I try to be discriminating but sometimes, I think, I may apply too high a standard. The picture above is a case in point. This was captured about a week ago. I was at a nearby park and saw these pretty birds “working” the area around the fence. The markings on this bird are quite distinctive but my reference resources are limited so I don’t know what kind of bird it is. Please, anyone, feel free to help me out.

When I sorted the pictures that night I lingered on this photo for quite a while because it is so dramatic. Birds are such awesome creatures of agility and I love pictures that capture their moves. I was going to post it but then thought better of it because it wasn’t “good enough.”

And then a fellow blogger — Bird Canada — posted a blog about flight and said, “in fact, a good picture can reveal things that go [by]  too quickly if you are looking at it at normal speed (even after the fact on a video).”  I immediately thought about this photo.  Yes, it isn’t as sharp as I would like but it is a good picture because of what it reveals. It has caught this bird springing straight into the air from the fence, with his wings tucked and extended all at the same time.  In the next moment, which I and the camera completely missed, he dove straight down in fast pursuit of a tasty morsel.

So, thanks Pierre for  your wonderful photo-essay.  Photographing birds in flight is not easy but even the less than perfect picture can be pleasing. ❧ 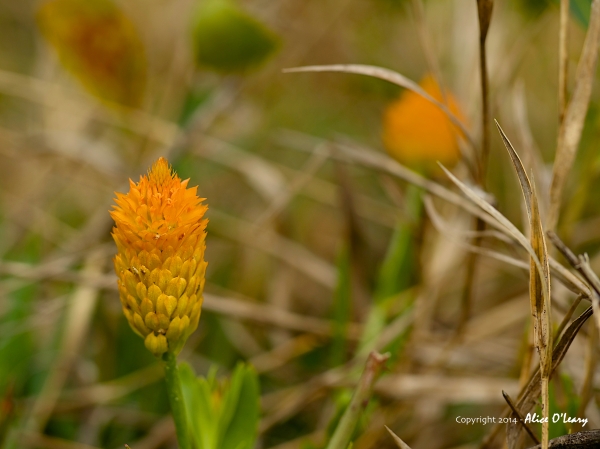 This is, I believe, a variant of the Bachelor Button.  At this time of the year they are scattered about Myakka River State Park, poking their heads through the brush. One amazing thing about these plants is the nautilus-like blossom crown which can be seen in the next picture. Another example of how patterns re-occur in nature. ❧

The swamp iris have begun to bloom. Scattered throughout Myakka River State Park, they are a beautiful sign that spring is here … at last.  Their botanical name is Iris virginica Southern Blue Flag but I have always called them Swamp Iris. Frequent readers of this blog have seen them before but, honestly, you can never see enough of them.  ❧ These windows on an old Florida farm house caught my eye and imagination recently. There was a time when there were dozens of dilapidated, clapboard farm houses all across the Florida landscape but they are rapidly disappearing in the “new” Florida.  I’ve photographed this particular house twice now.  It’s still standing but doesn’t have much longer.  To see more pictures from this shoot visit my Flickr set “Old Florida Farm Houses.” ❧ 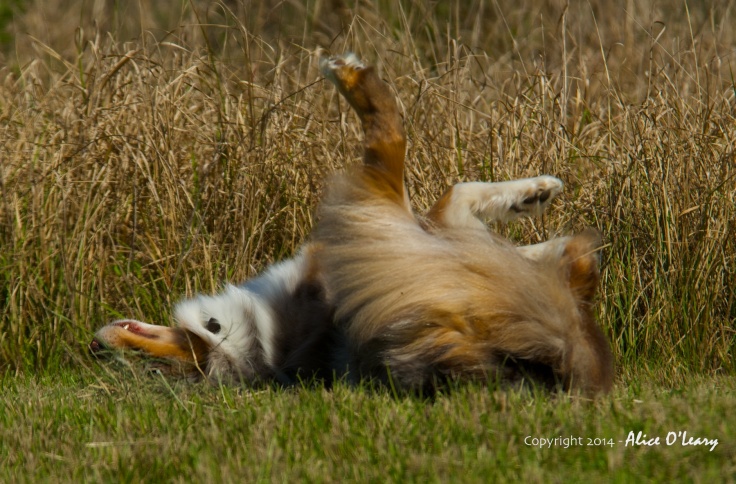 Tango and I walked the celery fields in Sarasota today. It is a vast open space that was once farm land and has been preserved because of its tremendous benefit to the bird populations.  You may have guessed from the picture that Tango was really enjoying it. He did his happy dance several times. If there was any doubt of his happiness just look at this picture: 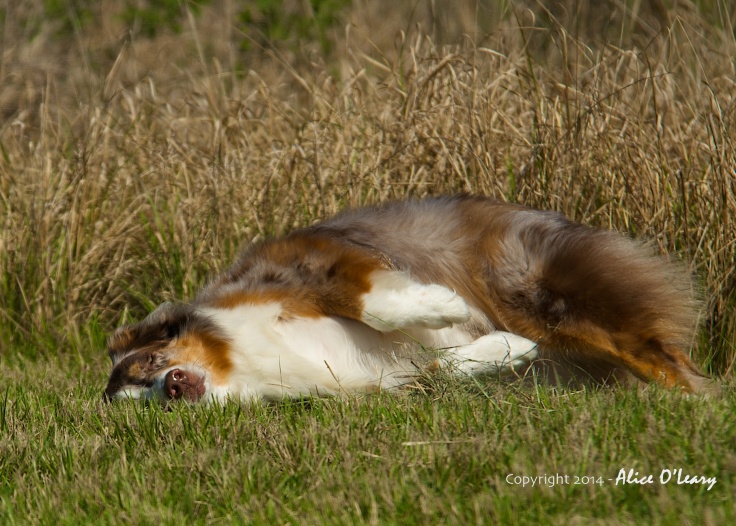 I’m dedicating this post to my cousin Margaret who just got her beloved Zoe back after six months absence.  Here’s to happy dances on both coasts!❧ 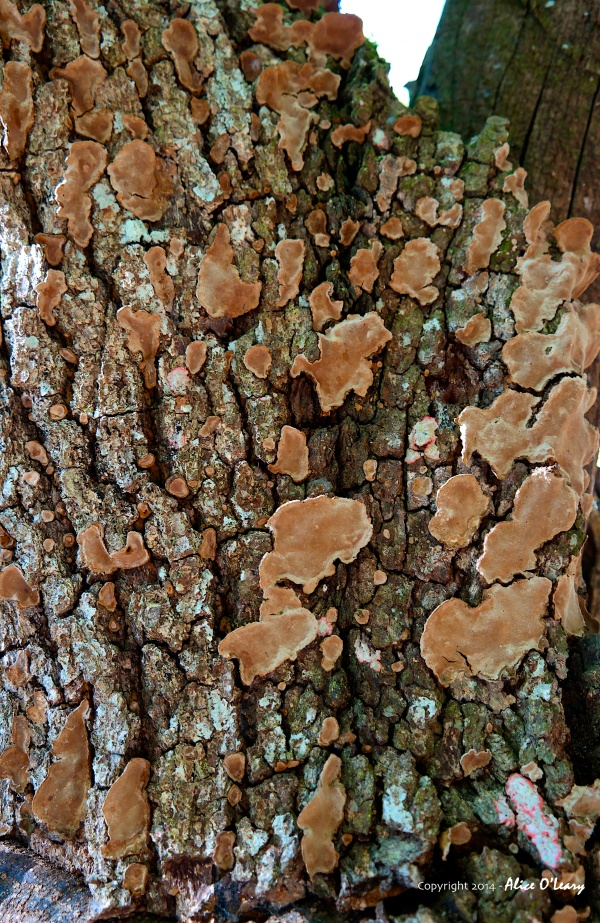 Lichen and mushrooms like to hang out together but they are different. Since I am without my reference books I can’t say definitively what all of those lovely colored beings are.  Mushrooms are the fruiting body of fungus while lichens are composite beings that have fungi and a photosynthetic partner growing together in a symbiotic relation. (Thank you Wikipedia.)  The pale green and the red & white growth are definitely lichen. But the tan colored growth has me stumped.  There are mushrooms that are similar to this so …. ?  This bark is on an old oak tree in the oak grove that I featured a couple of posts back (Oak Cathedral). ❧