The snow and clear, arctic air have combined to give absolutely gorgeous lighting for my bird shots. This Slate-colored junco has some beautiful highlight on his brilliantly white underside and all thanks to the snow. Had I walked outside and placed a spotlight I could not have done it better. ❧ 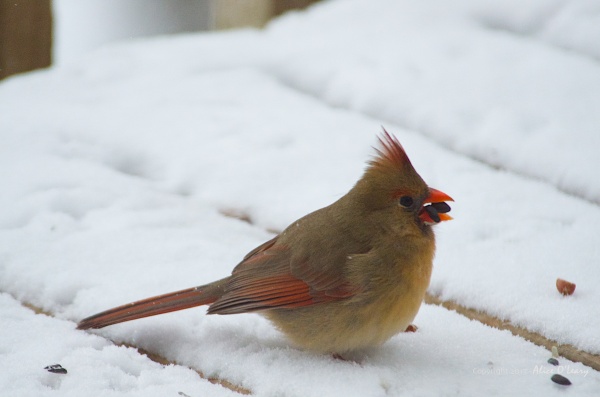 I think practical.  The bird seems young and it is probably her first snow fall so why not take as many seeds as the beak will hold?  ❧

We had snow today, at least three inches. It started in the early morning and lasted all day with varying degrees of intensity. I was delighted since it was what I had stayed for–winter.  Photographers want to record experiences and I wanted some pictures of winter. I’m not sure why. I hate the cold but, oddly, snow seems warm to me. Tango and I had a good walk in the early afternoon, up Potts Branch Road to Little Cove Rd.  The snow was coming down  steadily. It was quite lovely. 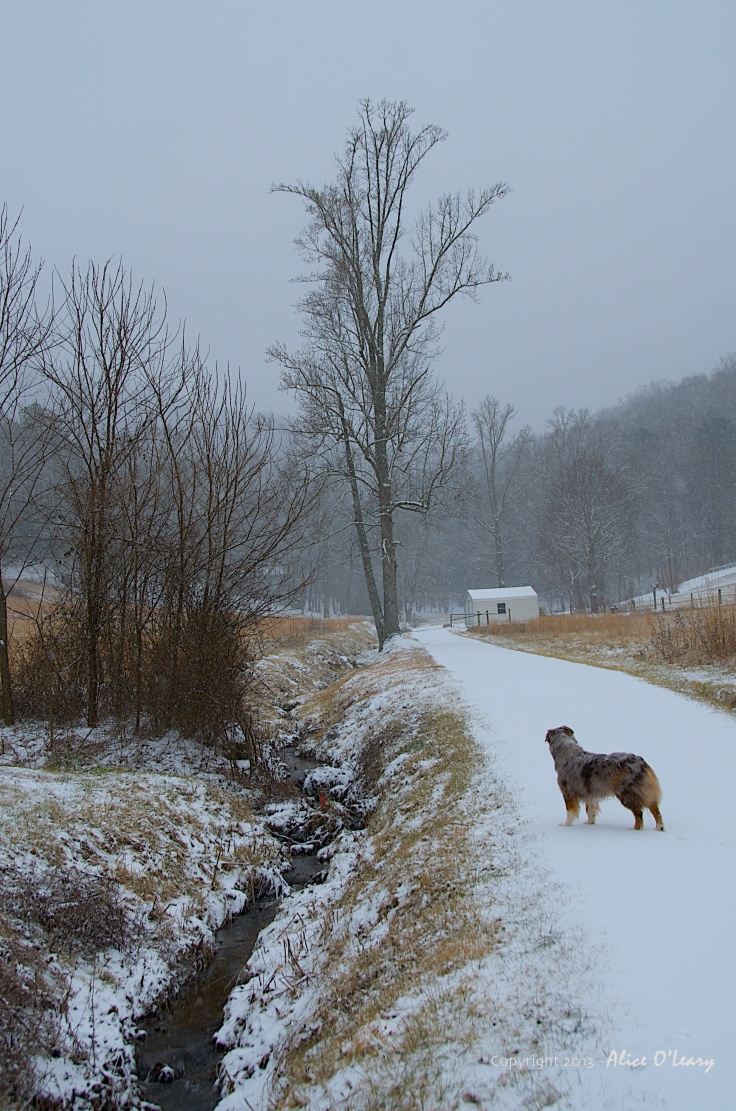 Tango had never seen snow and he thought it was …well, who the heck knows what he thought?   He seemed to enjoy it. I could tell he was confused about smells. He would nuzzle his nose deep into the snow, trying to follow a scent. I worried a few times that he would topple over into one of the many creeks that was along our walk but he is too clever for that. In the end, as you can see, he was happy and, like me, enjoying the experience. ❧ 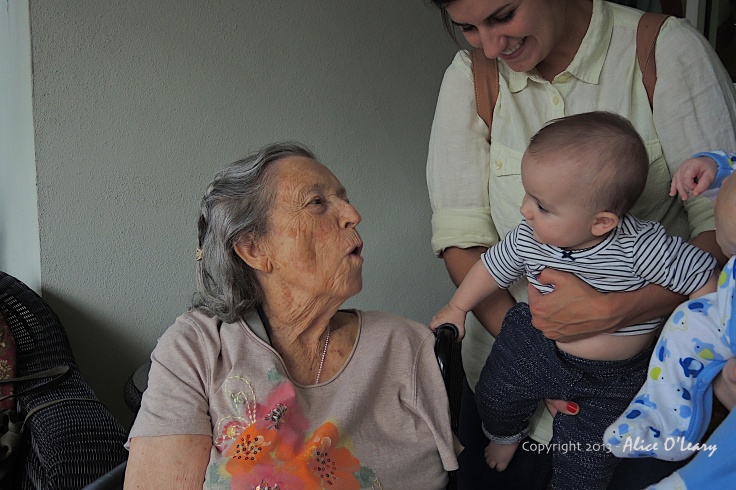 Frequent readers may recall Image #180 from a few days ago. It featured my 93-year old cousin Bunny with her great grandson Winston. It is only fair to post a picture of Bunny with her other great grandchild, Ellery.   Two great grand babies in one year!  Ellery is the oldest, she was born about nine months ago. Winston followed about seven months later.  Bunny was able to connect with both of them and in reviewing the pictures tonight I was struck with how animated Bunny was during her encounters with these babies. The very old and the very young are similar in many ways. I wonder why we don’t combine their care into one facility? ❧ 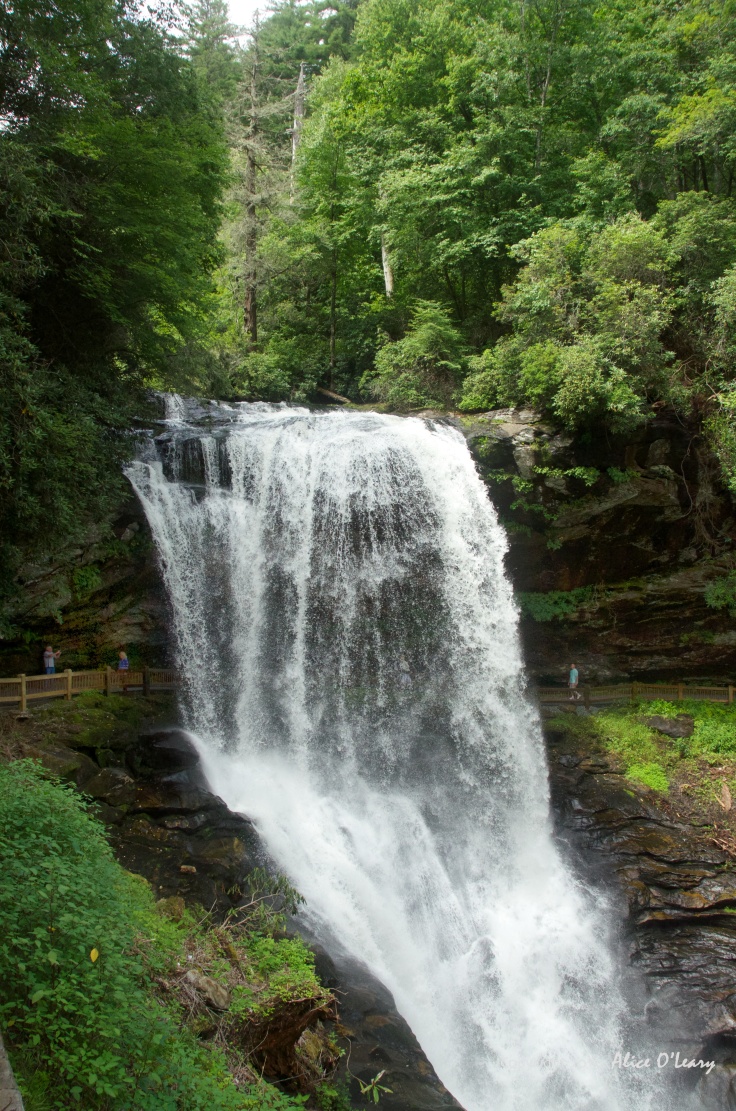 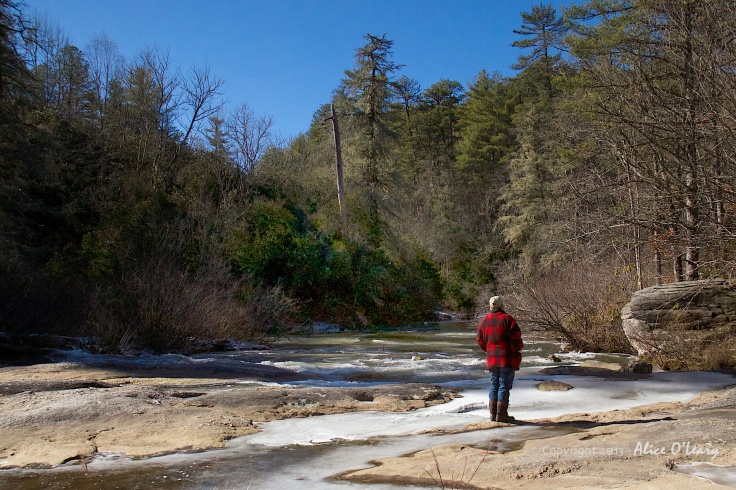 My friend Bonnie on the Cullasaja River.  Don’t let the sun fool you. It was cold!

Cullasaja means “honey locust place” in the Cherokee language. It runs through a gorge that has multiple waterfalls and scenic overlooks. The gorge is part of the trail followed by Spanish explorer Hernando DeSoto in 1540. ❧

This sparrow, I think it is a White-crowned Sparrow, landed on the handrail of the deck near my gargoyle. During this frigid weather, that has seized most of the nation, the birds are flocking to my feeders in great numbers.  Normally there are waves of birds who will all fly off at once and leave the feeders empty for a while. Now, however, it seems the feeders always have visitors. Some look very ragged and I wonder if they will make it through the night. The wonder is that any of them make it through this cold. ❧ 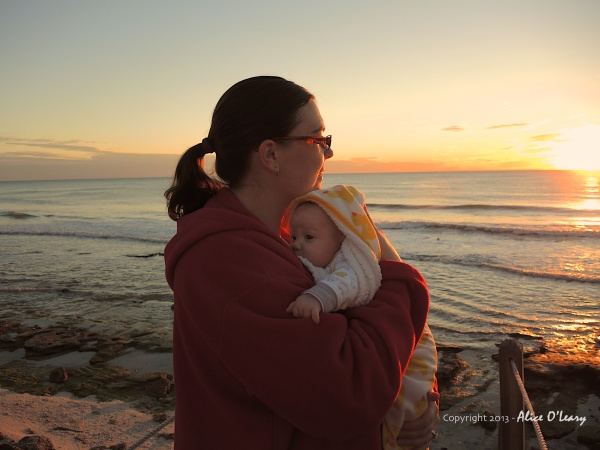 That’s my cousin Bridget Perry with her ten-week old son, Winston, watching the sunset at Point of Rocks in Sarasota, FL  It was taken about two weeks ago, just after the first major cold front passed through, affecting about 2/3 of the nation. Now we are enduring the second cold front and I think I posted this particular picture because it is full of hope and warmth–two qualities we need just now. ❧

It became a fine spring day here in Franklin, NC on the 19th of January. The temperatures topped out in the mid-50s and, if you chose your position properly, the wind was not a problem. These two canines–Sweet Pea and Murphy–were clearly enjoying the day on Boni’s deck.  Poor Murphy is an old man. He can no longer navigate the stairs to go and “do his business” in the yard so he pees on the deck and Boni patiently cleans up after him. We should all hope for this when we are old–a warm place in the sun and someone to lovingly clean up after us. ❧ 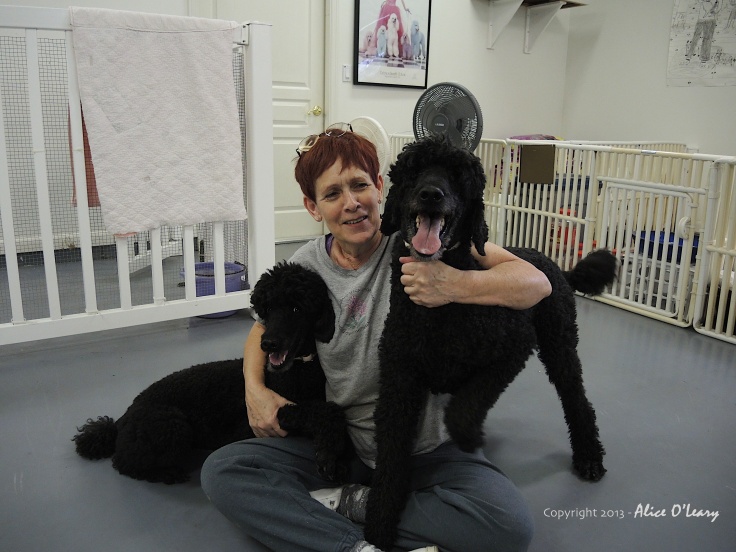 That’s my friend Mary with two of her standard poodles.  Until I stayed at Mary’s house I had never spent any time around Standard Poodles. I can see the attraction to them.  Their intelligence is very obvious and they move with a certain grace that is hard to describe. I was hoping to get a nice portrait of Mary and her poodles but the picture above is as close as we got. Trying to corral these canines proved to be a chore, as the picture below demonstrates. The dogs had other ideas. ❧